When you think of horror comics you think of Tales From The Crypt or Vault Of Horror. If you never read these comics from the past you know the type of stories in them and thinking about them puts a smile on your face. Now there’s a graphic novel that pays homage to those comics and adds a Latino flavor. Sueño Street is written by Patricia Santos Marcantonio with art by Mike Youngman. 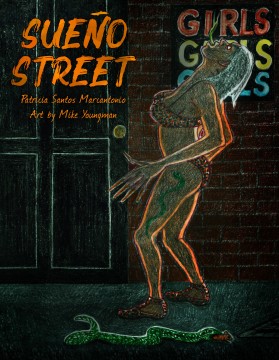 In the introduction Patricia Santos Marcantonio talks about her love of comics and how she wanted to make her own using Latino characters. Sueño Street comes complete with its own horror host, a young street artist who draws scenes of nightmares and unseen places. He points out that every action has consequences and gives us six tales of horror.

One of my favorite stories here was the tale of La Llorona the weeping woman. This is a story that is part of Hispanic folklore centering on a ghost of a crying woman who drowned her kids and is now searching for her lost children along the river. In this story we hear about her orgin in 1920 from Mexico. What makes this one so great is that marionettes are used to tell the tale, sort of an art form in an art form. For a short story there is a lot of depth here as we hear about the emotions of La Llorona and learn why she did it. My favorite part was the end as we see the emotions of La Llorona’s mother and how the street artist reacts.

Another good one is about Cucuy the Hispanic boogeyman. It takes place in 1761, a woman named Lita takes on a job caring for a child who believes that no one likes him and others believe may be evil. He says he has a special friend and that friend may be responsible for other children in the town disappearing. Lita discovers that something may be wrong with the boy but is he truly cursed? I love how this story opens up with a man telling Lita she has come to Hell and Lita answering that she has already been there. This is a good bit of foreshadowing as we see that Lita can handle such things as a monster who lives under beds.

Sueño Street is a stunningly visual walk down memory lane. Patricia Santos Marcantonio adds a certain depth to each story that you don’t often see in comics and the art compliments her storytelling nicely. As I was reading it I was reminded of the horror comics I enjoyed as a kid along with all the anthology shows I use to watch like Tales From The Darkside. These stories don’t necessarily have a moral to them they are just meant to entertain and scare us and they do a great job of it. What makes this a must read is that it centers around Hispanic folklore which is something you don’t normally see in comics. Though the main reason you should get it is great art and great storytelling, what more can you ask for?